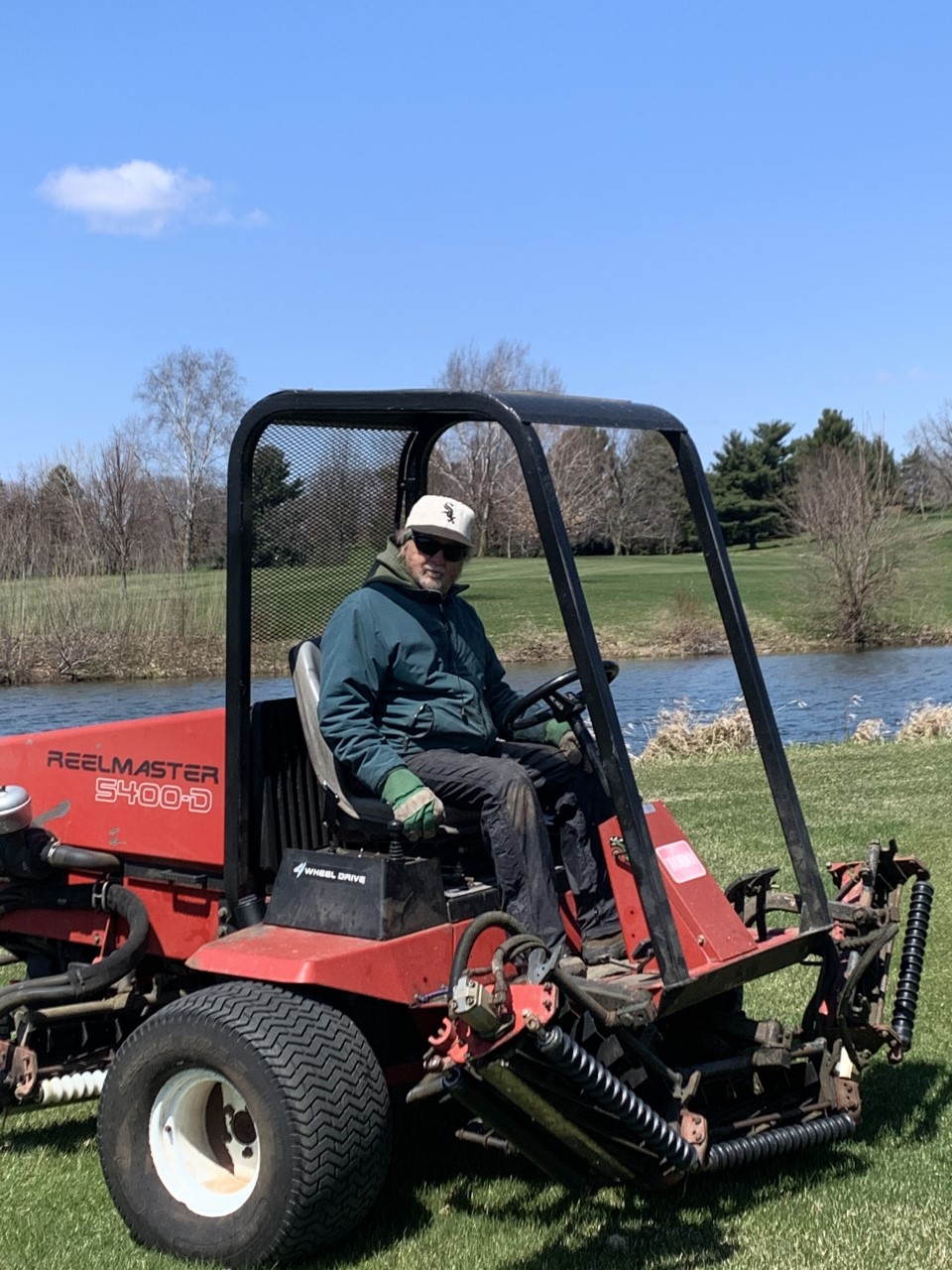 What is Kevin's role at Pleasant View Golf Course?


Kevin has been our Golf Course Superintendent for 20+ years. He is the head of our Maintenance Department and he knows every square inch of our 300-acre property. Each week, Kevin plans out the tasks and projects for the Grounds Crew.  He carefully assigns tasks to specific staff members each morning, writing their duties for the day on a board in the maintenance office. Through his many years of experience, he has learned to be flexible. After all, he can’t control the weather. He does the majority of the planning, scheduling, and assignments for course maintenance and makes sure that the course is in pristine condition each day. As the demands of the golf course have evolved throughout his time as Superintendent, he has learned to adapt. From starting work as a young adult on a maintenance crew of only three guys, to now managing over 20, he is appreciative of his crew and all that they do for our golf course.

Kevin grew up in Middleton when it was merely a village of four-thousand people or less. The first time he was on a golf course was at the age of 10 when he and his cousin caddied for his dad and uncle at PVGC. Little did he know what was in store for him. Kevin graduated from Middleton High School at the top of his class and a member of the National Honors Society. School always came easy to him and from a young age he had a knack for reading and writing. When he was only in 6th grade, he was writing sports articles for the local newspaper. Kevin went on to college at UW Madison, where he studied Agriculture, Journalism, and History. Going into college his dream was to become an author, and write books while living in the Alaskan wild. After two years of college, Kevin started to get burnt out. Him and a friend decided to change their pace. They bought a 1972 Volkswagen van and traveled out west for 13 months, gaining more perspective and experience than a lifetime would give most people. While traveling, Kevin saw things that he never thought existed and his eyes were opened to a whole new world, apart from his traditional middle-class upbringing. Here, Kevin realized that he wanted to do something outdoors for the rest of his life.

How did Pleasant View Golf Course come into Kevin's life?

Kevin returned to Middleton after being on the road for 13 months, and at the suggestion of a friend, applied for a job on the Grounds Crew. At that time, he was one of three department staff members, and he worked for $2.85/hour. At first, he dreaded coming to work each day, and found his supervisor then challenging to work for. His supervisor later went on to be one of the best mentors and friends of his life. He worked on and off at PVGC through his young adulthood, occasionally trying out other jobs; always coming back to PVGC, oftentimes for less money, because he loved that he could work outdoors. It was challenging work and long hours, but it soon became his passion.

Kevin is very passionate about music. He has been to many concerts in his lifetime. His favorite artists are: CCR (Creedence Clearwater Revival), The Beatles, Lynyrd Skynyrd, Waylon Jennings, and Linda Ronstadt. Kevin is also passionate about sports and takes pride in his local teams. He is a big Packers fan, as well as Bucks and Brewers. He enjoys reading historical books, writing, gardening, and spending time with his dogs.

Kevin enjoys the topography of our property. He has spent arguably more time than anyone on our golf course, and appreciates all the beauty it has to offer. He still swears that he saw a mountain lion out on the course 20 some years ago. I believe him.

Where does Kevin see Pleasant View Golf Course going in the future?

Kevin knows that PVGC will only continue to grow. He admits that one of the most challenging times of his life was during the grow-in of the new course 20+ years ago, but he takes pride in all of the success that has come from his hard work and days spent working sunup to sundown. Kevin said that Jeremy pushes him, and it’s stressful at times, but he admits ultimately it’s good and is in the best interest of the course. Kevin’s goal is to make PVGC the best public golf course in the area. Personally, I think he’s already succeeded at that.

Who has influenced his passion for golf the most and why?

Kevin admits that he doesn’t have a huge passion for golf; he does however, have a great passion for golf courses. He rarely watches golf tournaments, but he enjoys watching the birds-eye footage of the courses prior to tee-off. He doesn’t play much anymore, but looks fondly on the time he spent playing with three of his brothers, exploring different courses years ago. One of his favorite courses he has played at is Trout Lake Golf Club in Northern Wisconsin.

Two people who influenced and inspired Kevin the most in his career were Jerry and Joe Kessenich, who were both previously Kevin’s supervisors and were with PVGC since its inception.

Additionally, Dewey Stendahl had a great influence on Kevin throughout his life and especially during his 25 years of coaching youth baseball and hockey. 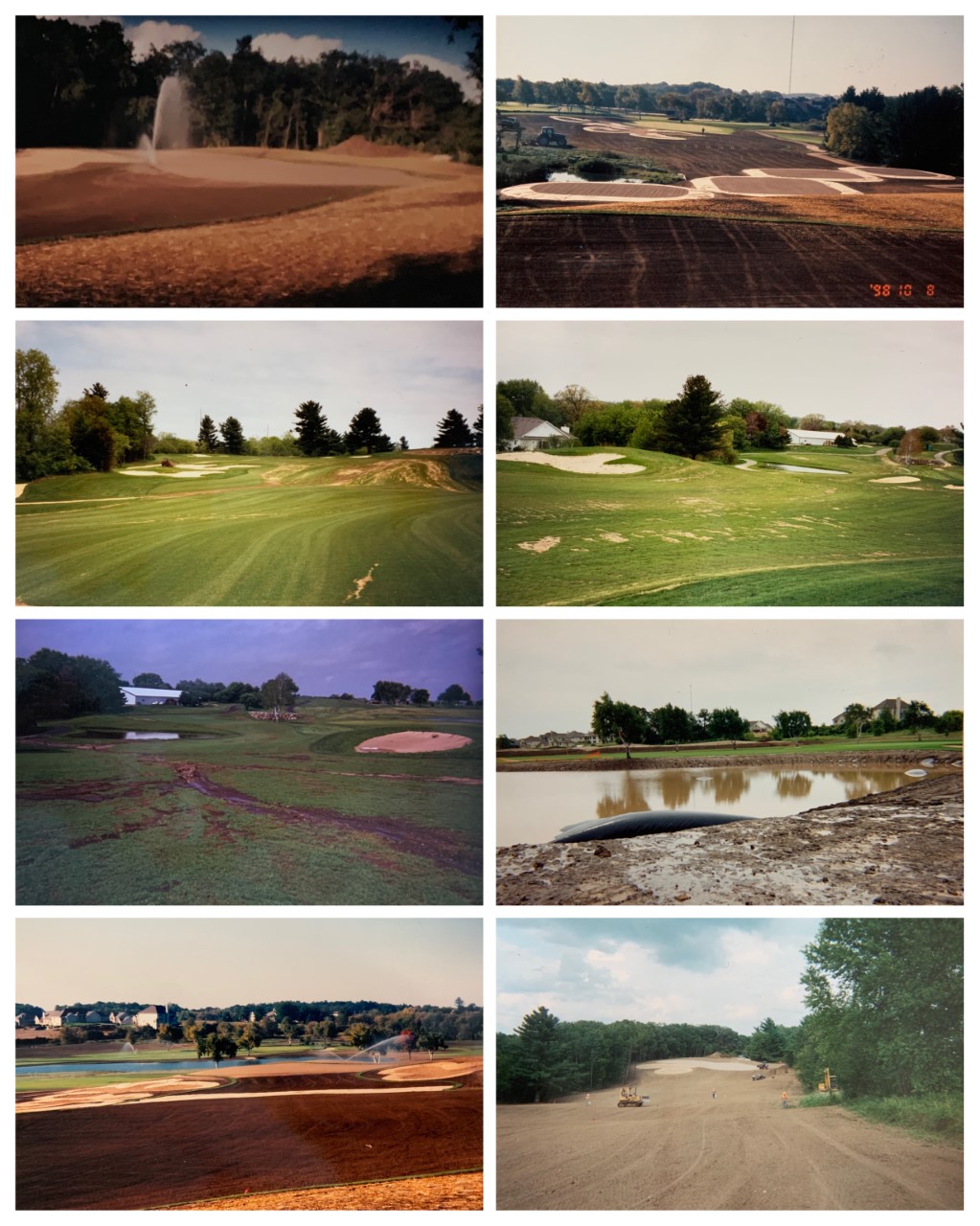 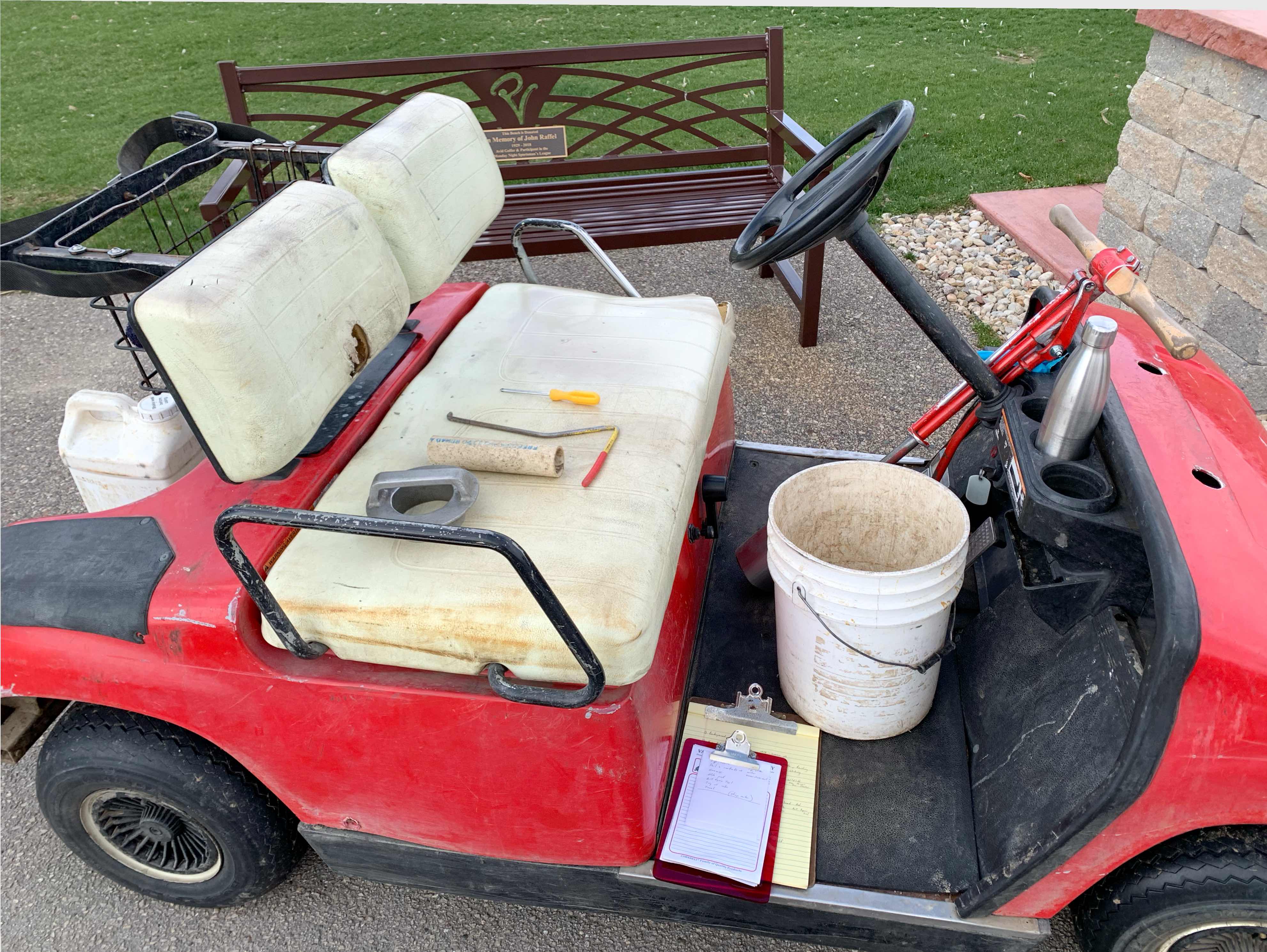 Each day, Kevin carries in his cart a jug of water for changing cups, a cup cutter (each staff member has their own..Kevin’s has been with him for over 20 years), a cup setter, a piece of pipe for rolling the holes, a cup puller for changing the cup locations, an awl (special screwdriver), a bucket of top dressing sand, clipboards for making notes as he drives around to make plans, a repair tool, and a canteen of water.

What does the future hold for Kevin? What are his aspirations?

Kevin plans (key word) to work two more seasons at PVGC and then retire. He hopes to continue working on the Grounds Crew at that point and finally be able to travel again. Who knows, he might buy a cheap van, throw his dogs in and head to Yellowstone or Glacier, he said. He hasn’t been to Yosemite since 1977, and would love to go back. Alaska is still number one on his list.

Is there anything that he misses about “old Pleasant View?” What does he not miss?

Kevin misses the rural atmosphere that used to surround PVGC. He misses the serenity of it. He remembers when there was nothing on either side of the beltline but farms. He also misses the old 18-hole set up. His favorite hole was the old 14; he loved how high you used to tee off and how the good golfers would try to cut the corner and get right on the green.

The grow-in of the new golf course was both his favorite and least favorite project of his career. He remembers as the new Superintendent feeling overwhelmed at the large responsibility of building an entire new 9-hole course. Kevin remembers buying a small TV to keep in his office so he could watch the Packers play. After all, once you seed a new course, you have to water it nearly every two hours. Kevin devoted much of his time to building the new golf course. He remembers one time he was watering the course over night and saw an orange light fall through the sky, shooting something out onto the golf course. The next day, he found a meteorite on what is now Woods 3. It has been one of his most prized possessions ever since.

Kevin has been around PVGC for many years and has seen it all. In closing, he mentioned that seeing how the culture of golf has changed at PVGC over the years has been both fun and rewarding to watch. He remembers when golf was very much an elitist sport, and to watch it open it up to all kinds of people is neat. He said that when he became the Superintendent, there were two ways to play the role..some wear nice clothes and delegate jobs to people, then there’s Kevin’s way... 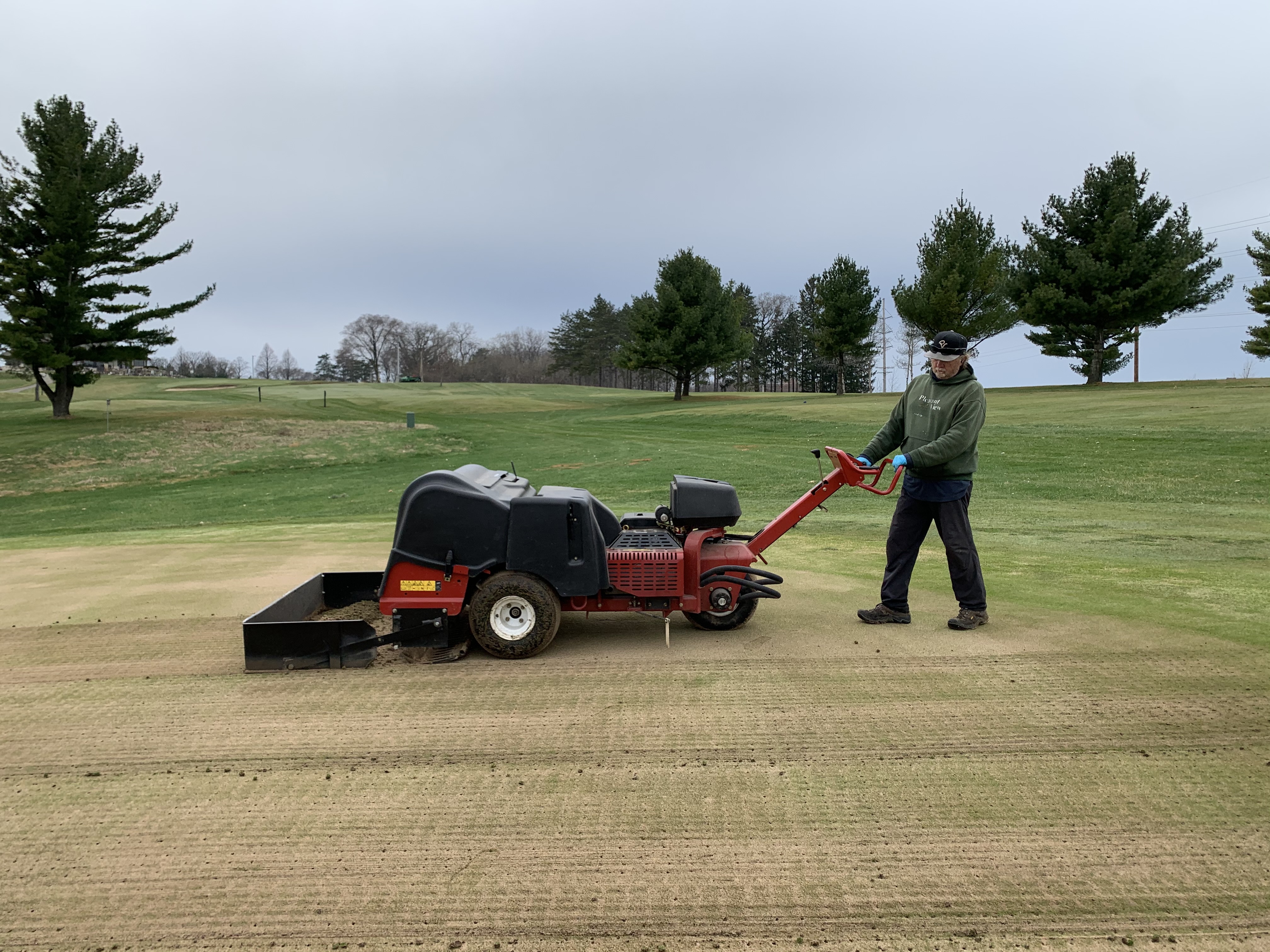